The rotor valve is one of the oldest valves. It rely on the rotation of the center line of the rotor to achieve the purpose of opening and closing.

The rotor valve consists of three basic components: valve body, cyclone and valve cover.The rotation is generally cone -shaped or column, and the holes that allow the fluid to pass.Its role is to cut off, allocate, and change the direction of the medium.As shown in Figure 2-12.Just rotate 90 ° during operation, let the fluid pass, and then rotate 90 ° to close the valve;

Its disadvantage is that the switch is laborious, the sealing surface is easy to wear, it is easy to get stuck when high temperature and high pressure, and it is not suitable for regulating traffic. 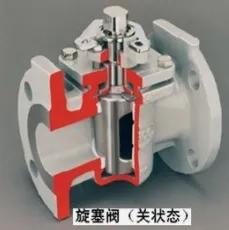 The rotor valve has two basic forms. One is a non -lubricating rotor valve. It uses materials with small friction coefficients to reduce the friction between the rotor surface and the valve seat.The other is a lubricant -type rotor valve. It opens a slot or groove that can be pressed into lubricating oil on the lubricant.